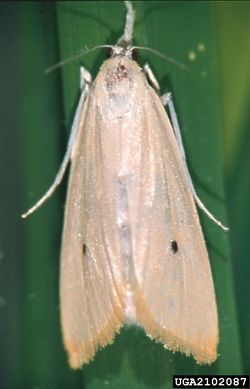 The moth is found in Asia, Australia and Europe and bores into the stems of rice. Feeding activities often destroy the growing point of young plants, producing dead hearts. Older plants show yellowing of the leaves, stunting and white heads (empty panicles). In Asia, the average annual losses of rice due to C. suppressalis and Scirpophaga incertulas have been cited as 5-10%, with localized outbreaks causing more 50% crop losses.

The moths are nocturnal and females deposit their egg batches on the leaf bases. The hatching larvae feed first on the leaf tissue and later bore into the stems. In tropical regions, the development from egg through 5-6 larval stages to mature adult lasts around 1-2 months and there are several generations per year. There is only one generation in temperate areas and the older larvae (4th to 6th instars) go into diapause during the winter. Pupation takes place inside the stems.

Pheromone traps are used for monitoring. Management involves the destruction and removal of stubble and rice straw after harvest, as well as early planting. There are some resistant cultivars and genetically engineered rice varieties, expressing Bt toxins Cry1A and Cry2A, have been developed. Insecticides are frequently used by farmers and pesticide resistance is common.

In Japan, a decline of the C. suppressalis populations has been observed during the 1980s and 1990s. Possible reasons included early planting, increased harvesting by machines and burning of the rice straw.

The larva grow up to 25 mm long and are yellowish to grey with darker longitudinal stripes. The head is brownish. The adults have a wingspan of about 25 mm with cream-coloured to yellowish forewings, bearing one or several dark spots. The hindwings are white.