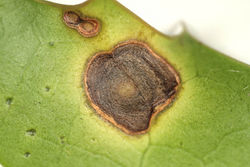 The fungus causes various plant diseases and is widely distributed, mainly in warmer regions. It often causes rots on underground parts of the crop, like black rot on groundnut, red crown rot on soybean or root rot of laurel, resulting in wilting and/or crown rot of the plants. However, it has been also reported to cause brown leaf spot disease on several plants. Yield losses of up to 50% have been reported for some diseases.

The fruiting bodies (perithecia) are reddish orange and spherical or oval, about ½ mm in diameter. Ascospores are on average about 40 x 5 µm large. Conidia are cylindrical, have 1-3 septa and measured about 50-80 x 6 μm.