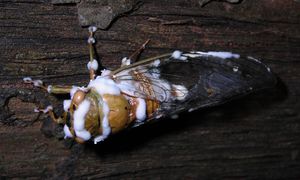 This genus is a widespread group of entomopathogenic fungi with around 20-30 species. They infects most types of insect pests and are found in many environments. The conidiogenous cells have a swollen basal part and a characteristic "zig-zag" rachis. The spores are white (white muscardine).

The genus is economically important for the microbial control of insect pests and is widely used, in particular Beauveria bassiana which, however, should be considered a species complex. The genus is are related to the genus Cordyceps and part of the family Cordycipitaceae.