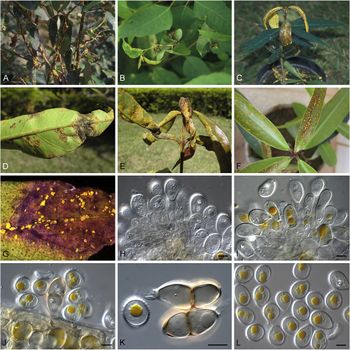 This fungus attacks various species of the family Myrtaceae. It causes important forest diseases in South America (apparently its centre of origin) and is considered to be a serious threat to eucalypt plantations worldwide. It was first detected in eastern Australia in 2010 (see Pegg et al., 2014).

The impact of A. psidii on an individual tree or shrub ranges from minor leaf spots, foliage, stem and branch dieback to reduced reproduction. Tree death, as a result of repeated infection, has also been recorded for some species. Losses of approximately 20% have been reported on eucalypt seedlings in South America. In Australia, several native species have become endangered due to repeated infection leading to tree mortality (Crous et al., 2019).

The fungus can be also beneficial if it attacks invasive plants like Melaleuca quinquenervia, see the page "Austropuccinia psidii as weed pathogen".