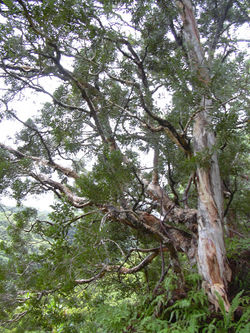 The tree is native to the eastern coastal areas of Australia and part of the Pacific. Since around 1900, it has been widely planted as an ornamental in the U.S.A. and some other countries. Its natural habitat are swampy areas and it became established in the wetlands of the Florida Everglades where it has multiplied extensively, suppressing many native plants. It forms dense stands with continuous canopies. It has also been declared a noxious weed in other southern parts of the U.S.A.

The numerous, tiny seeds disperse through wind and water and the plant also propagates vegetatively. Since the 1980s, classical biological control has been the main management strategy. For example, the weevil Oxyops vitiosa and the psyllid Boreioglycaspis melaleucae have been established successfully as biocontrol agents in Florida.

The tree can grow to a height of 25-30 m and reach a trunk diameter of almost 1 m. The leaves are 4-9 cm long and 1-2 cm wide. The bark is characterized by its paper-like layers which tend to peel off on the outside.