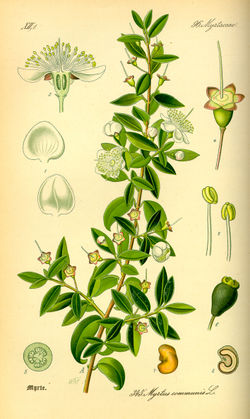 This is a large family of trees and shrubs with around 5,000 species. Most are evergreen and have simple leaves with an entire margin. They produce fragrant oils and some bear edible fruits like guava and Eugenia species. Several species are invasive and are considered environmental weeds. For example, Melaleuca quinquenervia has been introduced as an ornamental from Australia into several countries. It has become established in the swamplands of some regions, notably the south-eastern U.S.A., where it threatens the native ecosystem.

The following genera and individual species are currently entered under this family: