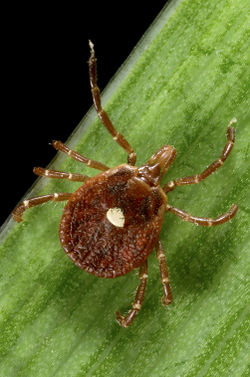 This genus of hard ticks contains more than 100 species which are found mainly in the tropics and subtropics of America and Africa. Some species also live in Asia and Australia. They parasitize cattle and other domestic animals. Humans may also be attacked. Apart from causing blood loss and stress, they can also transmit various diseases like those caused by Ehrlichia and Rickettsia (e.g. Rocky Mountain spotted fever to humans).

The females lay their eggs on the ground. The larvae and nymphs typically infest small mammals and drop off the host after feeding, moult and parasitize another host. The 3rd host is usually a larger mammal. However, birds and reptiles may also be attacked.

The species are comparatively large (up to 25 mm), often with white markings, long palpi, a long hypostome, and a short basis capituli. The posterior margin of the abdomen has a series of projections.