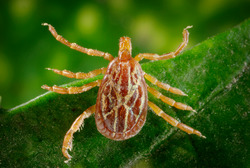 The tick is found in North- and South America mainly on various small wild and domestic mammals. It may also bite humans and is a vector Rickettsia parkeri causing eschar-associated spotted fever group rickettsiosis in humans. It can also transmit Hepatozoon americanum, the agent responsible for American canine hepatozoonosis.