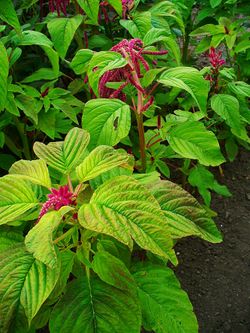 The weed species of this genus are widely distributed, mainly in temperate and subtropical regions. They affect predominantly field crops like vegetables, potatoes, maize or soybean. The species are prolific seed producers. The seeds are typically dark and shiny, up to 1 mm in diameter. They disperse through water or through human activities and due to variable dormancies germinate over a period of several years. The weeds of this genus are especially problematic in no-till cultivation systems.

Pigweeds are erect, annual plants with diamond-shaped leaves and dense inflorescences. The colour of the inflorescences is mainly green in weed species, but may range from purple to red and yellow in other species. While the genus includes some very important weeds, some species are used as vegetables (including the weedy A. hybridus), cereals and ornamentals.

The most important weed species are: