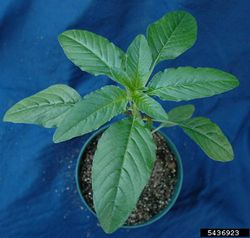 The weed is found in North America, mainly in the north-eastern parts, and is a problem in crops like maize and soybean. In both crops, yield losses of up to 50% have been reported when this weed occurs at high densities. Germination and growth of the plant is variable and it can adapt to different environmental conditions. Up to 1 million small seeds per plant are produced. These disperse by water, animals, farm equipment and to a lesser extent by wind. The seeds remain viable in the soil for many years. Herbicides are commonly used for control. However, herbicide resistance has been reported in some populations.

The annual plant grows to a height of almost 2 m. The leaves are ovate-lanceolate, have long petioles and are up to 10 cm long and 3 cm wide. Flowers are small and wind-pollinated. Male and female flowers occur on separate plants and plants of both sexes are found at similar frequency. Apart from being dioecious, it can be also recognized by the narrow leaves, compared to other common Amaranthus species in North America, like A. retroflexus or A. powellii.