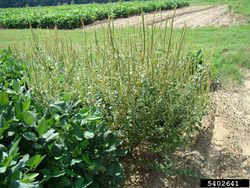 This is a serious weed which is native to North-America and has become established in Europe. The weed is highly competitive and a problem in crops like cotton, maize/corn, soybean or groundnut. Yield losses of more than 50% have been estimated, depending on the density of the weed.

It grows very fast and produces abundant seeds, often more than one million per plant. The seeds are viable in the soil for several years. They disperse by agricultural equipment, animals, wind and water. Control through herbicides has become more difficult with the appearance of herbicide resistant biotypes, including resistance to glyphosate.

Palmer amaranth is dioecious (a plant is either male or female) and the pollen can drift several hundred meters to reach female plants. It grows to a height of up to 2 m. The leaves are oval, hairless with a petiole about as long as the blade. The terminal spike may grow up to a length of ½ m. Female inflorescences have prickly bracts. The seeds are dark reddish-brown to black, lens-shaped, and around 1 mm long. The young plants and seeds are edible and it has been cultivated as a crop in the Americas during historic times.