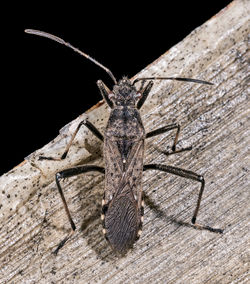 This family of plant-sucking bugs is widely distributed and contains around 250 species. They feed on leaves, flowers and seeds. Especially pods of legumes are often attacked. Several species are important agricultural pests like the bean bug, Riptortus pedestris, or Leptocorisa chinensis, a rice pest.

The species of this family are long and narrow, around 10-20 mm long and often with a brownish colour. The nymphs might resemble ants. The family shows similarities to the Rhopalidae and Coreidae, but the head is often broader, e.g. as broad as the pronotum. Other morphological characters include the structure of the legs and the venation of the forewings.