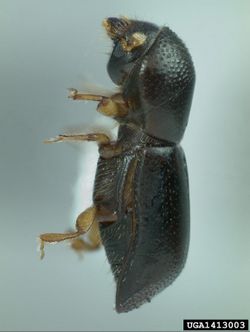 The ambrosia beetle is native to southern Asia and has been recorded from North America since 2002. After its introduction, it has spread quickly accross the south-eastern U.S.A. It attacks healthy redbay (Persea borbonia), avocado (Persea americana), sassafras trees and other Lauraceae. It carries the symbiotic fungus Raffaelea lauricola into the attacked trees which causes the lethal laurel wilt disease. The beetle has special structures (mycangia) near the mandibles to carry the fungus which serves as its food. Tree mortality has been substantial in some outbreak areas, with most redbay trees being killed.

The female adult beetle is slightly more than 2 mm long. Males are rare, smaller and flightless. The life cycle from egg, through 3 larval stages, to mature adult lasts 2 months or more. In the field, the emergence of new adults peaks 3-5 months after a tree has been infested.