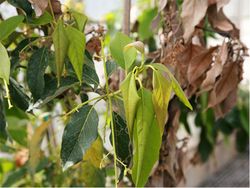 The fungus causes a deadly vascular disease of several tree species in the family Lauraceae. It has been introduced into southeastern U.S.A. together with its vector, the redbay ambrosia beetle (Xyleborus glabratus) (first record 2002) and has resulted in widespread mortality of redbay trees (Persea borbonia), e.g. see Shearman et al., 2015. It also kills avocado (Persea americana) and sassafras trees (Sassafras albidum). It moves systemically through the plant and causes the foliage to discolor and wilt within a few weeks or months. A single beetle can lead to the death of the whole tree.

R. lauricola is an asexual fungus and produces small pockets of conidiophores (sporodochia) in the beetle galleries. These serves as food for the beetle. The disease apparently originates from Asia. The fungus has been isolated from X. glabratus in Japan and Taiwan, as well as from diseased avocado trees in Myanmar (Ploetz et al., 2016).