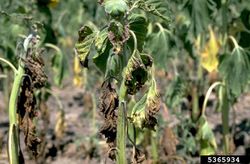 The species is a soil-borne fungus which causes serious wilt diseases on many hosts, including vegetables and field crops. It has a world-wide distribution, but is especially important in temperate regions. The microsclerotial form of the fungus (consisting of melanized hyphae) can remain viable in the soil for more than 20 years.

The most important crops affected by this species are potato, cotton, olive, tomato, eggplant, strawberry, pepper/chilli, rape/canola, cabbage, artichoke, mint and melon. On cotton, annual yield losses of 0.5-3.5% have been estimated nationwide in the U.S. and up to 7% in other regions.

The fungus enters the plant through the roots and causes blockage of the vascular system, leading to wilting and eventually plant death. For management, crop rotation and resistant cultivars are recommended. The use of fungicides is usually not considered economical.

Conidia are ovoid or elliptical in shape, smooth-walled, non-septate, around 3.5-6.5 x 3-4 µm large. No sexual stage is known. The fungus also forms melanized microsclerotia, about 25–100 µm large, which can survive in the soil for many years.