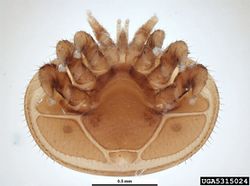 The mite is an external parasite of honey bees with an almost world-wide distribution. Originally it was a parasite of Apis cerana in Asia but has adapted to Apis mellifera around 1950, and has developed into a serious problem for bee keepers.

The species was first recorded in Europe in 1967 and was introduced into North America in the 1980's. It punctures the soft intersegmental cuticle of the parasitized bees and suck their hemolymph, leaving open wounds. These rarely kill the host, but shorten its life span. Parasitized colonies decline. Further, the mite can transmit honey bee viruses like the Deformed wing virus (e.g. Locke et al., 2017).

For reproduction, female mites move into honey bee larval cells and lay eggs once the cells are capped. The young mites then move to the freshly molted adult bee and disperse this way to other colonies. The can also switch hosts when 2 bees stay close together in the hive. The development from egg, through the protonymph and deutonymph stages, to the adult mite lasts around 1 week. The adult female is reddish brown and about 1-1.8 x 1.5-2 mm large.