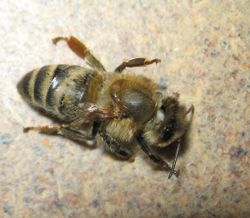 The virus is wide-spread and affects honey bee colonies. It may not cause apparent symptoms or results in wing deformity. The wings are often tiny or undeveloped. Other abnormalities may also become visible. Infected bees only live for about 2 days and are normally expelled from the hive. The virus disease can be transmitted by Varroa destructor.

The particles of DWV are icosahedral and about 30 nm wide. The RNA genome has a length of about 10,000 nt and encodes a large polyprotein. Several, closely related variants of DWV have been described. This includes a virus that has been named "Varroa destructor virus 1". This virus is also called DWV Type B and has been originally isolated from the parasitic honey bee mite Varroa destructor. Type B typically causes few symptoms.

The virus belongs to the genus Iflavirus, family Iflaviridae. These are insect viruses similar to the Infectious flacherie virus which infects silkworms. They contain single-stranded positive-sense RNA.