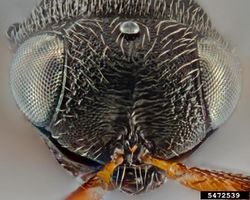 This wasp is found in eastern Asia, where it is a solitary egg parasitoid of stink bugs like, for example, Nezara viridula. It has been also recorded from Europe as an adventive egg parasitoid of the invasive stink bug Halyomorpha halys since 2016 (Peverieri et al., 2018). In Italy, it has become the most abundant egg parasitoid of H. halys, often reaching an exploitation efficiency of more than 50% (Scaccini et al., 2020).