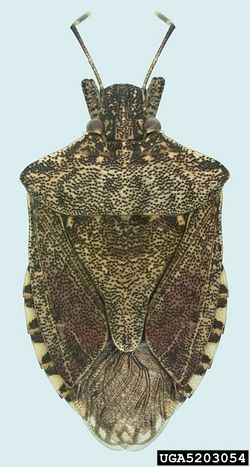 The bug is native to eastern Asia and has been recorded from North America since 1996 (first recorded in Pennsylvania). Subsequently it was also introduced into Europe, first records from Switzerland in 2007 (Wermelinger et al., 2008) and from Germany in 2011 (Heckmann, 2012, Haye & Zimmermann, 2017). It has been spreading quickly in these invaded areas, possibly by hitchhiking on trucks and cars. In addition, it can fly 5 or more km in one day.

H. halys is a serious horticultural pest with a broad host range. In particular fruit trees, like apple, and legumes are damaged. The bugs feed on the developing fruits, resulting in deformations and rotting, sometimes in total loss of the harvest. The losses on apple in North America have been estimated at around US$ 37 million for 2010. In addition, it can become an urban nuisance through large aggregations during the winter, when the bugs search for a shelter. More than 25,000 bugs have been collected in a single house (Inkley, 2012).

The life cycle from egg, through 5 nymphal stages, to the mature adult stage lasts about 2 months under laboratory conditions. In Asia, one or several generations per year have been recorded, depending on the temperature. In Central Europe there is only 1 generation. The adults are 15-20 mm long, with a light brown background colour and fine dark brown dots and marks. Diagnostic characters to separate H. halys from European pentatomid species can be found in Wyniger & Kment (2010).

This species has been covered by several reviews, see for example: