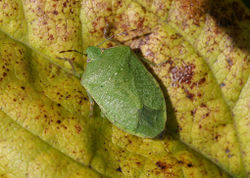 This species of stink bug is widespread and common in tropical and subtropical regions. It is polyphagous attacking crops like cotton, soybeans, other legumes, brassicas, cereals or nut crops. N. viridula feeds predominantly on shoots and immature fruits which shrivel, become deformed or fail to develop. Plant pathogens like Pantoea agglomerans might be transmitted during feeding. Fruits with punctures might taste bitter. Yield losses can exceed 50%.

The development from egg, through 5 nymphal stages, to mature adult lasts around 2 months and there are up to 6 generations per year. During the year it often switches from a crop to weeds. In subtropical regions, it overwinters as adult, hiding in cracks on the bark or among plant debris, often in aggregations. The adults can fly for up to half an hour and disperse over short distances.

The adult is typically apple green, shield-like and 10-15 mm long. Overwintering adults can have a brownish colour. In addition, several other colour forms have been described. The eggs are barrel-shaped and are laid on the lower surface of leaves, in compact, neatly arranged groups of 50-100. The younger nymphs are dark with prominent white spots. Older nymphs are mostly green with some red marks.