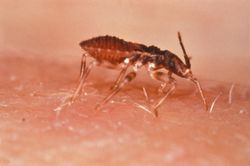 This species of kissing bug is common in houses and peridomestic environments in southern and central parts of South America, where it feeds mainly on humans and domestic animals. It is an important vector of Chagas disease, caused by the protozoan Trypanosoma cruzi. The disease can cause heart failure if not treated and infects domestic animals and other mammals as well. During feeding Triatoma infestans excretes the parasite and contaminates the wound. The thatch and mud houses of rural South America and the close proximity of humans and domestic animals provide the ideal environment for Triatoma infestans and other Chagas vectors like Rhodnius prolixus, resulting in high insect populations. The insect feeds during the night. Pesticide control programs have been quite succesful in some areas.

The development from egg, through 5 nymphal stages, to adult lasts around 5-6 months, but may extend to almost 2 years if bloodmeals are not readily available. The nymphs can also starve for extended periods. The adults are around 35 mm long and brownish in colour. The abdomen has conspicuous yellow or red stripes. They are poor fliers and use theirs wings mainly for gliding from a shelter in the roof (but prefer to climb back).