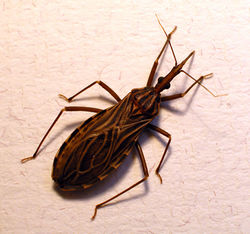 This is a common species of kissing bugs in the northern parts of South America and in Central America. It is a nocturnal and sucks the blood of humans, other mammals and birds. It is a vector of Chagas' disease and has a similar importance compared to Triatoma infestans (see that page for more details). The disease is caused by the protozoan parasite Trypanosoma cruzi. R. prolixus can also transmit Trypanosoma rangeli, a related disease.

The disease agent is excreted during feeding and contaminates the wound when scratched. Feeding lasts only around 15 minutes and an adult bug can suck up to 300 mg of blood during that time. The insect is common in domestic environments of rural areas, but can be also found in forests where a natural habitat is the crown of palm trees. The development from egg, through 5 nymphal stages, to adult lasts around 3 months.

The presence of Rhodnius prolixus in Central America is believed to have originated from an accidental laboratory escape in El Salvador around 1915, with a subsequent spread to neighbouring countries. In this region it was confined to domestic environments only. In a large campaign Rhodnius prolixus has been brought under control (possibly erradicated) in Central America, see Hashimoto & Schofield, 2012.