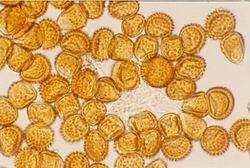 This genus is widely distributed and includes around 15-20 species of rust fungi. It is mainly characterised by the morphology of the teliospores and how they are attached to their pedicels. Several species cause diseases on crops like Tranzschelia discolor, the causal agent of peach rust.