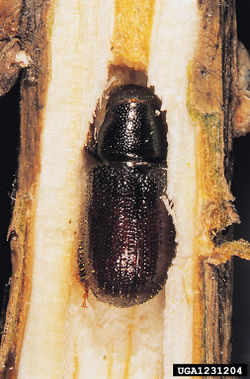 This is a small genus of bark beetles with less than 10 species. They feed and breed mainly on pine trees, although some other conifers might also be attacked. The adult beetles lay eggs in the trunks and branches of the trees where the larvae feed on the phloem. These are often dead and dying trees but in live trees branches might break off. However, the main damage is done by the emerging adults which fly to nearby living pine trees and attack the shoots. One beetle can attack and destroy several shoots and the damage can be severe.

Economically the most important species is Tomicus piniperda which is native in Europe, northern Africa and parts of Asia but has been introduced into North America around 1990. The beetles are 3-5 mm long, brown to black in colour. The genus can be recognized by a number of morphologically characters on the head, antennae, pronotum and elytra.