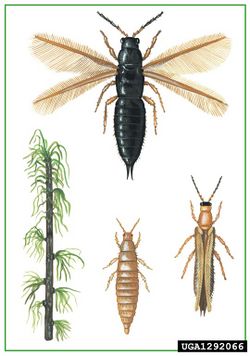 This is a large genus with around 300 phytophagous species, many of them plant pests. They scrape the leaves causing silvering and drying up, followed by immature leaf drop. They also feed on pollen and fruits. Several species have spread from their native range and have become serious agricultural pests. The species are also important vectors of plant viruses, mainly from the genus of orthotospoviruses.

The species of Thrips can be recognized by a number of morphological characters, including:
• head with 2 pairs of ocellar setae and setae II shorter than setae III,
• fore wings with a complete row of setae on the forevein, at least in the basal half.

For a review of the vectors of tospoviruses see Riley et al., 2011