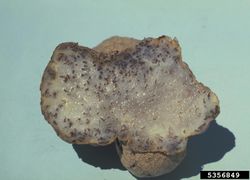 The genus Thecaphora contains more than 50 species of smut fungi that infect a variety of plant families. Important diseases are for example peanut smut or potato smut. The sori can form on seeds, flowers, and other parts of the host plant, often producing pustules or galls. The teliospores are typically arranged in spore balls and form powdery masses that are yellowish- to dark reddish-brown, but not black.