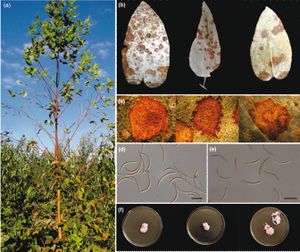 This fungus causes leaf spots on the upper and lower surface of eucalypt leaves. The spots are initially pale green, but later turn yellowish and then become necrotic with red-purple margins. T. pseudoeucalypti has been first described from north-eastern Australia (Andjic et al., 2010) and appears to be native there. It is morphologically very similar to Teratosphaeria eucalypti which, however, occurs only in south-eastern Australia and New Zealand. Both species differ mainly by their DNA structure.

Since 2012, T. pseudoeucalypti has been also reported from southern Brazil, where it can cause severe defoliations (Cândido et al., 2014). Around the same time, the fungus was also found in neighbouring countries in South America.