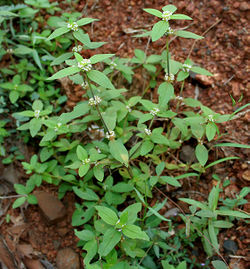 This is a large plant genus with almost 300 species of herbs and small shrubs. They grow mainly in tropical and subtropical parts of America, Africa, Australia and Asia. They have small, usually white flowers, arranged in head-like inflorescences. Several species are regarded as agricultural weeds. For example, Spermacoce verticillata, is a weed of grasslands, cereals and other crops in tropical parts of America and in Africa.