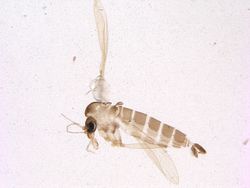 This genus of sandflies is mainly found in the Mediterranean, North African, Near East and western Asian regions. The species occasionally feed on humans and other mammals, but reptiles and sometimes amphibians are the main hosts.

Common species are Sergentomyia minuta in the Mediterranean region and S. schwetzi in northern and eastern Africa. Some species have been shown or are suspected to be involved in the transmission of virus diseases and Leishmania, including disease agents of humans and domestic animals.