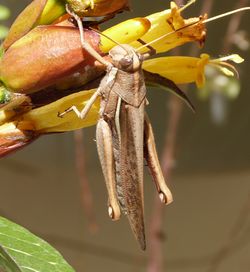 This species is the most destructive locust in South America and can cause large-scale economic losses during plagues or large outbreaks. Such outbreaks develop when suitable conditions trigger mass-breeding and swarm formation in northern Argentina, with the migrating swarms also affecting neighbouring countries like Paraguay and Bolivia. For example, a large-scale outbreak developed between 2015 and 2017 in Argentina to an extent which had not been seen since the 1950s.

The locust is polyphagous and many crops are attacked, like cereals, legumes, potatoes, citrus or cotton. S. cancellata is a true locust and switches to the morphologically different gregarious phase (phase polyphenism) when high density populations develop, similar to the desert locust (Schistocerca gregaria) in Africa (Pocco et al., 2019).