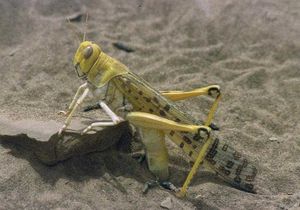 The locust is an important pest in Northern Africa, the Sahel, the Near East and South-West Asia. It is polyphagous and can multiply rapidly in the desert after rains and forms swarms up to hundreds of square kilometers in size. These swarms can fly long distances and cause complete defoliation when they reach crops. Such destructive outbreaks, sometimes leading to famines, have been already reported during biblical times.

The species lives in the solitary phase in certain habitats between outbreaks. The nymphs and adults of this phase show considerable differences in coloration and behavior compared to those of the gregarious phase. Egg pods, containing 50-100 eggs, are laid into the moist sand. The gregarious form goes through 5 nymphal (hopper) stages over a period of 2-3 months. Including the incubation period of the eggs and maturation period of the adult, the whole life cycle is usually 3-5 months. Adults have a length of 5 cm (males) to 6 cm (females).