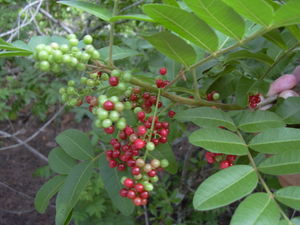 The weed is an evergreen shrub or tree introduced into the south-eastern United States from Brazil as an ornamental in the late 1800s. It has become an aggressive weed in a variety of habitats and spreads rapidly. In 2012. the species was estimated to have invaded 283,00 hectares in Florida. It competes successfully with native plants, possibly due to allelopathic chemicals produced by its root or its phytotoxic fruits and leaves. Currently management options are limited to mechanical and chemical control methods and both are costly.

Studies on possible biological control agents have been ongoing since the 1980s. However, despite identifying a number of potential species in South America, none was so far found to be suitable for release, e.g. because of an unacceptable wide host range.