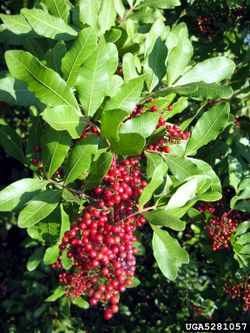 This family contains around 800 species of trees and shrubs that grow mainly in the tropics and subtropics. Various members are planted as crops like mango and cashew trees. However, several species are regarded as weeds in some regions. These have been introduced as ornamentals or as a source of wood and have become invasive. For example, the Brazilian peppertree, Schinus terebinthifolius, is native to South America and has established in other regions. It has become highly invasive in Florida.