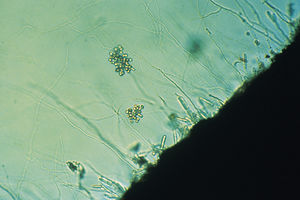 The order of Saprolegniales contains several hundred species of oomycetes. They are often associated with aquatic environments (water moulds). The Saprolegniales are characterized by both primary and secondary zoospores developing during the same life cycle and by each oogonium always producing several oospores. Most species are homothallic and form oogonia and antheridia on the same mycelium.

The genus Aphanomyces de Bary 1860 contains around 50 species, many of which are pathogenic to plants, fish and crayfish. There around 7 plant pathogenic species which cause root rot diseases. Some of them are host-specific while others have a broader host range. For example, Aphanomyces euteiches is a common plant pathogen. It is widely distributed in temperate regions and causes root rot on leguminous crops. Other species infect crops like brassicas, spinach, beet or tomato.