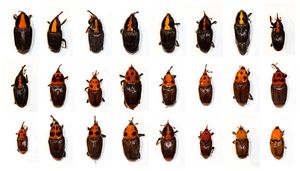 Colour polymorphism in Rhynchophorus species. The image shows a mixture of several species which cannot be separated by colour pattern or morphology. These have been identified as R. ferrugineus, but include at least one other species, R. vulneratus (click on image to enlarge it)
Author: Paul F. Rugman-Jones, Christina D. Hoddle, Mark S. Hoddle and Richard Stouthamer
Source: PLOS ONE, 2013, 8 (10 - e78379)

This weevil is native to Indonesia and Malaysia, where it attacks palm trees. It has been reported from California in 2010 and was subsequently eradicated from there. R. vulneratus is morphologically identical to Rhynchophorus ferrugineus. Both species show colour polymorphism, see illustration at right and can be only separated with the use of DNA analysis. Before 2013, R. vulneratus has been considered to be a synonym of R. ferrugineus (Rugman-Jones et al. 2013).