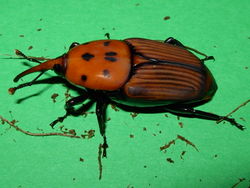 The weevil attacks and kills palms in various regions. The larvae bore into the top part of the palm stem which is still relatively soft. Wounds caused by tools at the base of fronds or the top of the stem are typical places for the adults to start the attack and lay eggs. The feeding activity of the larvae destroys the base of the fronds and the first symptoms are a collaps of the fronds starting with the younger ones. At a later stage, the whole centre of the palm is destroyed and only a few older fronds remain attached to the stem (see photos below).

The weevil is native to southern parts of Asia, where it feeds mainly on coconut palms. It has spread in the 1980s to the Near East, where it became a major pest of date palms. More recently, it has invaded North Africa and Europe and since 2009 has been reported from the Caribbean. Reports of this species since 2010 from California apparently refer to Rhynchophorus vulneratus (Rugman-Jones et al. 2013). Apart from coconut and date palms, various other types of palms are attacked in the invaded countries.

The adults are around 3-3½ cm long, black underneath and reddish brown on the upper side with variable black marks and colourations (see the illustration below). The life cycle from egg to mature adult last about 2-3 months. The most practical control approach is trapping, combined with the removal of the insects from the attacked palms.