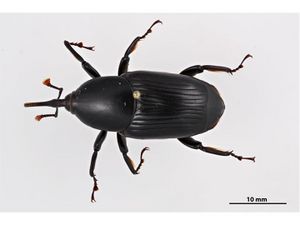 This weevil is found on the island of New Guinea and neighbouring islands of Indonesia (the Maluku Islands) and the Solomon Islands. Like the related red palm weevil (Rhynchophorus ferrugineus), it attacks live palm trees, breeding in the soft, top-most part of the trunk, where the young fronds develop. In the process, the larvae destroy the growing point, killing the palm. Coconut and sago palms are the economically most important hosts.

In Papua New Guinea the sago grub is considered a delicacy and breeding in sago palms (Metroxylon sagu) is deliberately promoted as a source of food. Sago palms flower at the end of their natural life and accumulate starch in their trunk which is used by the palm to produce the inflorescence. The starch content of the trunk is highest just before the inflorescence develops. For producing sago, the palm is cut down before flowering and the starch is extracted from the stem. R. bilineatus is attracted by the cut down sago palms and breeds in the trunk. Up to several hundred fully grown R. bilineatus larvae can be extracted from the stem, about a month after felling the palm (Köhler et al., 2020).