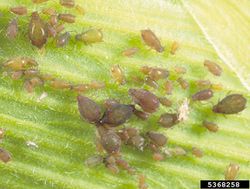 The aphid has a world-wide distribution and is common in subtropical and temperate regions. It attacks cereals like maize, barley and wheat, feeding mainly inside the whorl of the developing leaves. The aphid is an important vector of plant viruses like the Barley yellow dwarf viruses, Maize dwarf mosaic virus or Sugarcane mosaic virus which are transmitted in a persistent manner.

R. maidis is one of the most important cereal aphids and also infests other crops like sugarcane. While its ability to transmit viruses is more important than the direct feeding damage, high populations (more than 100 aphids per plant) cause yield losses of 10% or more (see Al-Eryan and El-Tabbakh, 2004).

Females reproduce parthenogenetically, giving birth to live nymphs. Development from birth, through 4 nymphal stages, to mature female only lasts 1-2 weeks. There are typically more than 10 generations per year. Winged forms are produced periodically and are important for dispersal and migration. Males have been rarely observed and eggs are unknown. R. maidis can not overwinter in cold climates. These areas are reached in the summer through migration.

R. maidis has many natural enemies (see the list of beneficials) which normally keep populations under control. Resistant cultivars have been also identified. Insecticides are mainly used if there is a risk of virus transmission.

The wingless adult female is around 2 mm long, bluish-green with short antennae and a purplish patch around the base of the cornicles. Legs, cornicles and cauda a darker.