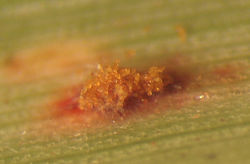 The fungus causes a serious rust disease of sugarcane in Asia and Australia which has been also reported from the Americas since 2007. The disease is characterized by the development of orange to reddish-brown pustules (uredinia with urediniospores) on the lower surface of the leaves, up to 4 mm in length. See also Puccinia melanocephala which causes brown rust on sugarcane.