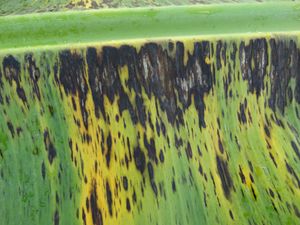 symptoms on banana leaf of infection by Pseudocercospora fijiensis (click on image to enlarge it)
Author: Scot Nelson
Source: Flickr

The fungus causes black Sigatoka, a serious disease of bananas, and has been also reported to infect Heliconia plants. On banana plants it is characterized by dark leaf streaks . The disease apparently originated in Fiji where it was first recorded from the Sigatoka district in 1963. It spread first to other parts of the Pacific and South-East Asia and then to other banana growing regions around the world, gradually replacing the less virulent yellow Sigatoka disease, caused by Pseudocercospora musae.

The leaf streaks are reddish-brown to black and run parallel to the leaf veins. They aggregate to form larger necrotic areas on the leaves. The disease does not kill the plants, but weakens them and results in a reduction of fruit yield and quality. The fruits harvested from infected plants also ripen prematurely. Yield losses can reach 75%.

P. fijiensis is difficult to control and requires frequent fungicide applications. Resistance to fungicides has been reported from various regions. Although some banana cultivars are resistant to P. fijiensis, most commercial cultivars used are sterile and therefore unsuitable for resistance breeding.

P. fijiensis is the most virulent species of the Sigatoka disease complex which also includes the eumusae leaf spot disease of banana (Pseudocercospora eumusae) and P. musae causing the yellow Sigatoka disease.