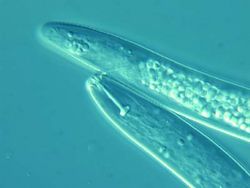 The species of this genus are migratory endoparasites which enter the root cortex and destroy and feed on the root cells. Parasitized roots are exposed to secondary infections by other pathogens. Infested crops include cereals, potatoes, bananas, other fruit trees and a large variety of other crops. In the field, patches of crops are usually affected. Symptoms include necrotic root lesions as well as stunting and chlorosis. Resistant cultivars, crop rotation and nematicides are use for management. Seedlings can be disinfected by hot water treatment.

The nematodes migrate within a root and in the soil to find new hosts, provided the soil contains enough water. Males are typically rare and females reproduce mostly parthenogenetically. The eggs are laid inside the roots or are released into the soil. The second larval stage hatches from the eggs and attacks young roots. It passes through the 3rd and 4th stage before molting to the adult stage. The total life cycle lasts for 1-2 months and there can be several generations per growing season. The populations typically decline between cropping seasons when nematodes persist in plant debris and become inactive. They may enter a partly dehydrated resting stage under dry conditions.

Adults are less than 1 mm long. Species can be distinguished by the structure of their stylets which are up to 20 µm long and have distinct basal knobs.