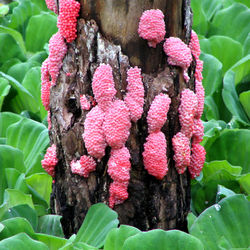 This is a large freshwater (or amphibious) snail, native to South America, which has been introduced as a food into Asia in the 1980s and has become a serious pest of paddy rice. It has also spread to North America, Hawaii and possibly Europe. The snail is highly polyphagous and feeds on any type of plant material, including crops like rice and taro. In outbreak situations, the snail can cause complete loss of young rice plants.

It is also a vector of the rat lungworm Angiostrongylus cantonensis that causes human eosinophilic meningitis. The snail is used as food in Asia and sometimes eaten uncooked. In its native South America it is considered a beneficial natural enemy of some aquatic weeds like Hydrilla verticillata.

The normal life span is about 4 years. The eggs are laid in clutches of 200-600 outside the water and are brightly coloured, apparently as a warning for potential predators. The shell is almost spherical and usually grows up to 4-6 cm in diameter (specimens up to 15 cm have been also recorded). This species has been misidentified in some literature, e.g. as Pomacea lineata.