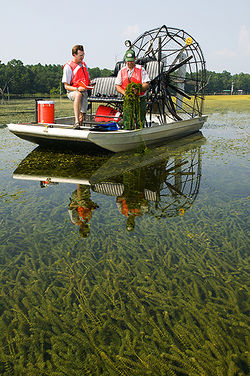 This aquatic plant is native to south-eastern Asia and Australia. It has been introduced as an aquarium plant into several countries and has become a serious weed in several parts of America and Africa.

H. verticillata is a submerged and rooted plant. Individual stems can exceed 5 m in length. The leaves are small, strap-like, pointed and arranged in whorls. The flowers are tiny, white and float on the water surface. The optimum temperature for growth is 20-27 °C. It is genetically divers and there are many biotypes. Some are monoecious (e.g. in the north-eastern U.S.A.) while others are dioecious (e.g. in the south-eastern U.S.A.).

Control usually relies on a combination of mechanical removal, draining the water body (if possible) and biological control agents like the Chinese grass carp. Previously, the herbicide fluridone was widely used. However, resistance has develop in several populations and herbicides are no longer favored due to environmental concerns.

Efforts to find a suitable biocontrol agent for this weed have been summarised by Purcell et al. (2019).