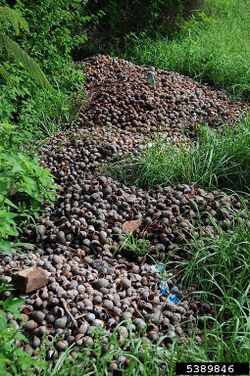 This is a genus of freshwater snails which have an operculum to close the shell. It belongs to the family Ampullariidae and contains more than 100 species. The genus is native to some tropical and subtropical parts of America and South-East Asia. Several species have been deliberately introduced by humans as a source of food outside their native range and have become serious agricultural pests. In the EU, the import of any snails from the family of Ampullariidae has been banned.

The snails have both gills and lungs, enabling an amphibious life style. When submerged, they can also use the lung and breath with the help of a siphon. They leave the water to lay their eggs which can be colourful. The shell is spherical and around 5 cm large. It has a variable colour of brown or yellow, without bands. The species are characterized by the structure of the shell, like the shape of the shoulders and sutures on the whorls.