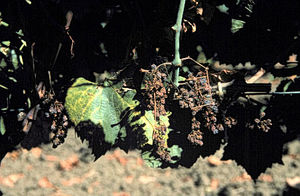 Symptoms of "bois noir" infection in grapevine (click on image to enlarge it)
Source: Wikimedia Commons

This phytoplasma is associated with "bois noir" of grapevine in the Mediterranean Europe as well as with various stolbur diseases of other crops. A survey in 2006 revealed an infected grapevine plant in British Columbia (Canada), see Rott et al. 2007. It has been also reported from several other regions.

The symptoms on grapevine include leaf discoloration and curling, berry shriveling, and irregular maturation of the wood. In some areas a disease incidence of more than 50% has been reported. On cherry, leaves are small, curled, chlorotic and turn red prematurely. On potatoes, it is associated with purple top disease which includes symptoms like stunting, chlorosis, slight purple coloration of new growth, swollen nodes, proliferated axillary buds, and aerial tubers. On maize the midribs, leaves and stalks show reddening, followed by desiccation of the entire plant and abnormal ear development.

Various planthopper species from the family Cixiidae have been implicated as vectors of this phytoplasma, like Hyalesthes obsoletus (more than 50% of individuals might carry the phytoplasma in some areas) and Reptalus panzeri. The phytoplasma has bee also associated with weeds, like Convolvulus arvensis.

At present, there is no effective strategy to manage the disease. For example the application of insecticides on the host plants has not influenced the disease or the vector populations. However, in some cases the recovery of diseased plants has been reported, indicating a resistance mechanism in grapevine. There is also evidence that resistance inducers (e.g. benzothiadiazole) could be used to promote such recoveries.

The phytoplasma has been previously grouped into subgroup 16SrI-G, but is now regarded as belonging to subgroup 16SrXII-A. The reference strain of this species is STOL11.