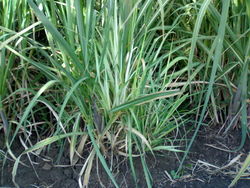 This phytoplasma is found in southern parts of Asia, infecting mainly sugarcane. The infected plants produce numerous thin tillers with narrow, often whitish leaves, especially in the central whorl, and canes are not formed. The disease can be transmitted through grafting or by leafhoppers. Several species of leafhoppers have been identifies as vectors, including Saccharosydne saccharivora.

The rDNA sequences of the phytoplasma show a close relationship to the Sugarcane white leaf phytoplasma. Genome sequencing suggested that the phytoplasma has 404 protein-coding genes, 12 transfer RNA and 2 rRNA genes (Kirdat et al. 2020).