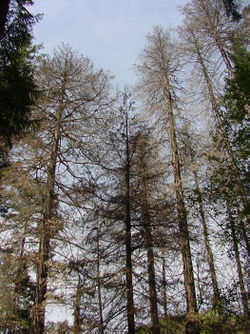 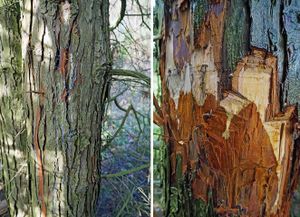 Phytophthora lateralis symptoms on Chamaecyparis lawsoniana in the U.K. (click on image to enlarge it)
Author(s): A. Pérez-Sierra
Source: Persoonia 2018, vol. 40, p. 192

This oomycete is a tree pathogen causing Phytophthora root rot on Chamaecyparis lawsoniana (Port Orford cedar). Some other conifer species can also become infected (Schlenzig et al., 2017). The disease was first reported from western North America in 1923 and starting in 1998, the pathogen has been reported from Europe. There are also reports from Taiwan since 2008 on Chamaecyparis obtusa.

The symptoms include root, collar and stem lesions, usually followed by tree death. Seedlings may be killed with a few weeks and mature trees within a year. In some stands, mortality has reached 90%.

P. lateralis is soilborne, but can also have an aerial or foliar infecting phase (Webber et al., 2012). It prefers cool and wet conditions. Abundant chlamydospores are produced, enabling it to survive dry and hot summers. Phylogenetically, P. lateralis is closely related to Phytophthora ramorum.