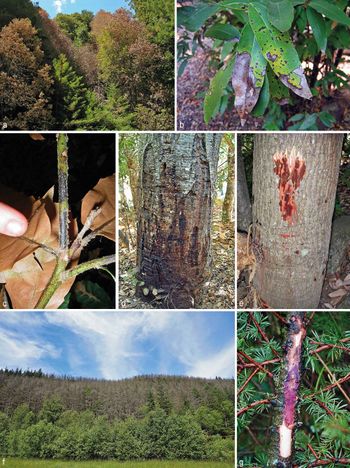 P. ramorum was discovered in the mid 1990s in California and has killed millions of trees. In 2005 more than 200,000 dead standing trees were found in the Big Sur region of California alone. It also causes sudden larch death in the U.K. as well as leaf blights (ramorum blight) and diebacks on various other plants, e.g. in Rhododendron.

It appears that P. ramorum is native to Europe and has been introduced into California, possibly via infected ornamentals. It then spread quickly through the costal forests of California and Oregon, causing stem canker as well as foliar and twig infections.

Asexual reproduction involves the formation of 1) spindle-shaped sporangia, approximately 50 x 25 µm large, containing ~30 mobile zoospores, as well as 2) durable chlamydospores. Sexual reproduction and the formation of oospores is possible in the presence of the two mating types A1 and A2. In Europe, only A1 has been found with some rare exceptions, while both types occur in North America.