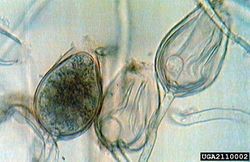 The pathogen causes a severe Phytophthora disease (root and collar rot) of alder in Europe since around 1990. The infections have resulted in significant losses of alder trees in several countries. The species is considered to have originated as a hybrid of other Phytophthora species or subspecies. Sporangia are egg-shaped to pear-shaped and 40-50 x ~35 µm large. Chlamydospores have not been observed.

They all infect alder and show distinctive morphologies and growth rates. Based on DNA studies they are now considered to belong to 3 separate species (Husson et al. 2015). The typical form (Phytophthora alni subsp. alni or Phytophthora ×alni) is regarded as the most aggressive form. It has ornamented oogonia and elongated two-celled antherida. DNA studies have indicated that it is a hybrid between Phytophthora uniformis and Phytophthora ×multiformis.