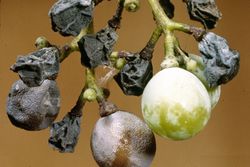 The fungus causes black rot of grapevine, a serious disease in warm and humid regions. Both yield and wine quality are affected and it may lead to complete crop losses. It is native to North America and has been introduced into Europe with planting material (first record in France in 1885). It is also found in South America and Asia. In Europe outbreaks have become more frequent since 2002.

The fungus overwinters in fruit mummies and forms perithecia in spring which release ascospores. These infect the shoots and young leaves initially. After an incubation period of about 2 weeks brown lesions with pycnidia and conidia develop. The latter cause secondary infections on all parts of the vines. On berries, infections spread in circles until the berries are completely shrivelled and black.